By clicking enter, I certify that I am over the age of 18 and will comply with the above statement.

So, what is hemp, and how did it fall out of, and back into, favor with government regulators?

Industrial hemp and marijuana are two subspecies of the Cannabis sativa plant.  Industrial hemp contains mostly cannabidiol (CBD) - which is non-psychoactive - and little to no tetrahydrocannabinol (THC), the psychoactive component that gives marijuana users a "high."  Hemp became legal in all 50 states wht the passing of the 2018 Federal Farm Bill.  The legal definition of hemp is that the plant must contain less that 0.3% THC, whilst marijuana can contain up to 30% THC.  This effectively separates the industrial hemp plant from the marijuana plant, which is legal in some states for medical and/or recreational use but still federally listed as a Schedule 1 controlled substance.  It is still illegal to transport marijuana for any reason across state borders.  In 2016, President Obama signed into law the Rohrabacher-Blumenauer amendment that prohibits the Justice Department from spending funds to interfere with the implementation of state medical cannabis laws.  This bill did not, however, change the legal status of marijuana, and thus it must be renewed every year.  So far, it has been renewed every year with clear bi-partisan support from both the House of Representative and the Senate.

With more and more countries legalizing hemp - including the United States - this non-psychoactive cousin of marijuana has the potential to become an important source of protein for bees, filling in a gap after other crops have stopped flowering.  Hemp has a fascinating history and many potential uses, and scientists are just starting to quantify its potential benefits for bees. 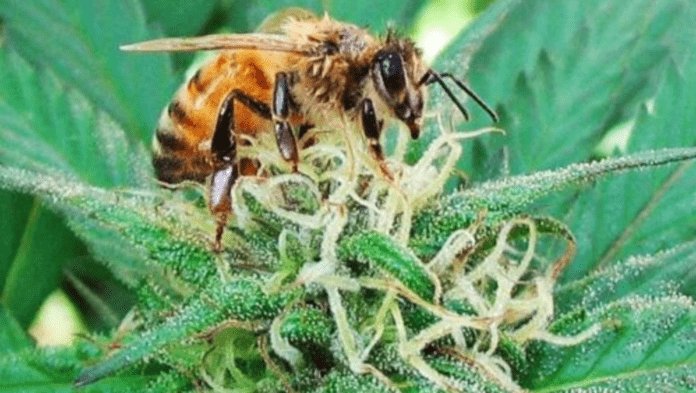 Humans have had a long relationship with the hemp plant.  As early as 10,000 years ago.  It slowly spread from there to the far corners of the Earth.  It made its way into the Americas with the coming of the Europeans in the 1600's.  All of the sailing ships that carried the new settles used hemp ropes and hemp fabric for the sails.  At one time it was illegal NOT to grow hemp in Jamestown, Virginia and in the states of Massachusetts and connecticut.  Many of the founding fathers, including George Washington and Thomas Jefferson, grew hemp on their plantations.  In fact, the Declaration of Independence was written on hemp paper.

The passage of the Marijuana Tax Act of 1937 reclassified hemp and marijuana as the same plant. Taxes were levied on hemp/marijuana growers, medicinal manufacturers/users, and also on all of its many industrial uses. Historical evidence shows that this was merely a political maneuver by politicians and industrial giants, who launched a vast media propaganda campaign denouncing hemp as marijuana and claiming it was an evil drug that was highly addictive, roused a “lust for blood” and gave users “superhuman strength.” Stories were written that refugees from the Mexican Revolution were distributing this killer weed to unsuspecting American schoolchildren. The propaganda campaign was so effective that it stopped all hemp uses and future innovations.

Then, in 1970, Richard Nixon commissioned Raymond Shafer to study marijuana, saying he wanted “a goddamn strong statement…one that just tears the ass out of cannabis supporters.” However, the Commission reported in 1972 that marijuana users were not dangerous and found them to be more timid, drowsy and passive and not a danger to society. It actually recommended that marijuana be decriminalized and that like alcohol, social measures should be used to discourage its use. Nixon was furious and buried the report. Hemp/marijuana was then listed as a Schedule 1 substance under the Controlled Substance Act. It fell under the jurisdiction of the Drug Enforcement Agency, which Nixon created in 1972 as part of the “War on Drugs.”

So, what about the bees?

Many countries legalized hemp a few years ago. Industrial hemp is now grown, manufactured and sold all around the world for a variety of commercial products including medicines, paper, textiles, clothing, biodegradable plastics, biofuel, food, animal feed, etc., all of which are derived from the hemp’s fiber or seeds. Here in the United States, hemp plants can be grown, sold and used in manufacturing in all 50 states.

There are two principal foods that bees collect – nectar and pollen. Bees collect nectar to make an enzymatically activated, partially fermented food called honey. They also collect pollen to make a lacto-fermented, enzymatically activated food called bee bread. For bees, honey is their source of carbohydrates and bee bread is their protein source.

In March 2019, Colorado State University published a study on hemp and bees. They found that bees love hemp! Why? Well, hemp flowers late in the growing season, between late July and late September, which is past the flowering of most other farm crops. In northern Colorado, where the study was conducted, hemp flowering occurred between the end of July and the end of September. This time period coincides with a scarcity of pollinator-friendly crop plants in the region, making hemp flowers a potentially valuable source of pollen for foraging bees.

The study collected over 2,000 bee specimens from 23 different bee types, including the honeybee, which represented 80% of all the types of bees in the region. The availability of hemp as a new source of pollen will help sustain bee populations later in the year. Why is this important? Well, according to the EPA, bee colonies have been declining due to stressors such as pests, pesticides, varroa mites and poor nutrition from lack of pollen, which is the main ingredient for bee bread.

Another benefit to planting industrial hemp is its potential role as a field crop in rotation with other cash crops like corn, soybeans, tomatoes and pumpkins, just to name a few. This is for another story. Stay tuned for the next hemp blog.